Jessie Moss is sick and tired of organising school bake sales. Parents like her are familiar with an endless cycle of fundraising so their kids can go on school trips – so she was gutted when the government announced a $2.3 billion spend on six new planes with submarine-bombing capabilities. 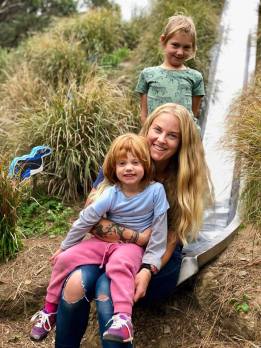 “It’s just idiocy,” sighs Jessie. “We’re told time and time again when the teachers and nurses are out marching for better pay, that the money isn’t there – but when we need new warplanes, the magic money tree appears.”

While many people resent this unfairness, Jessie is speaking out. And it’s no surprise, as the charismatic teacher, musician, and mother of two comes from a long line of people who have used their talents to campaign for peace in Aotearoa. Her grandmother is Elsie Locke, one of New Zealand’s most famous peace activists. Other famous relatives include former Green MP Keith Locke and Maire Leadbeater.

As you might expect, Jessie has a wealth of inspiring anecdotes about her relatives and their activist careers. She tells an anecdote about Elsie and a pregnant friend delivering an anti-nuclear petition to Parliament. On presenting it, an overbearing official tried to shame them, saying that they had no business doing such things, especially ‘in that state’ – a charming reference to the pregnancy.

“Her friend’s response was ‘That’s exactly why I’m doing it,’” says Jessie.

“Of course, she’s pregnant – why wouldn’t she care about the state of the world for future generations?”

As a mother herself, Jessie thinks parents have an important part to play in raising thoughtful children who can analyse information intelligently. And – no guns.

“Children form their ideas about the world through play. I think it’s fine to say to four-year-olds, ‘Guns kill people, and that’s why I don’t want you to play with them.’ Or else how will they know?”

Growing up in Wellington, Jessie’s children haven’t experienced the horrors of war. But some of the children she teaches haven’t been so lucky. “I teach scores of Syrian kids in my class who are still traumatised from war. I can’t even begin to imagine what my students and their families have seen. It’s really hard to educate traumatised children, and yet we’re still sending that money off into systems that bomb their families who are still in Syria.”

“People are led to believe that war is necessary, war is inevitable. But actually this is a money-making business – it’s not about protecting borders. It’s an arms trade and at the end of that system, people are being killed.”

Jessie’s family can boast three generations of people who have used their voices to speak out against war. Yet the outspoken family has drawn unwelcome attention, and many members were spied on by private companies and the government. Some relatives were surveilled from the age of ten.

“It’s so creepy,” says Jessie. “They started to be included in their parents’ files at that age – because they were distributing pamphlets! My uncle (Keith Locke) was spied on for 40 or 50 years. The hilarious thing about it – you’ve got to have a slightly humorous take on it – is that it’s a massive wealth of autobiographical Information. It’s a good memory jogger!”

Does she think she was spied on herself? “Yeah. I asked the SIS and they said they could ‘neither confirm nor deny’, which means yes, usually.”

If Jessie seems to take it all in her stride, it’s a testament to having grown up around staunch family members who refused to be intimidated. “It shows just how afraid these big companies are of activists, their defensiveness around their grotty business dealings, and the lengths they go to protect that stuff – it’s disturbing.”

She’s following in her family’s footsteps with her own creative twist, using her role as a folk singer to discuss peace and workers’ rights. “if you’ve got such a platform, you’ve got an obligation to use it wisely – and I’m definitely not one for benign, boring lyrics,” she laughs.

She’s not exaggerating. Her group The Wooden box band combine simple, charming folk melodies with powerful, poetic lyrics that explore war, power and the power of collective action. Her favourite anti-war song? Joe Hill, about a unionist who was killed because of his activism. It speaks to the power of collective action, about a movement that’s bigger than its figurehead: I dreamed I saw, Joe Hill last night / Alive as you and me / Says I “But Joe, you’re ten years dead” / “I never died” says he.

“It’s so important that people recognise they’re part of something bigger,” says Jessie. “I think the societies that we live in cause people to be disconnected. People aren’t looking at the world, seeing the connections between things, and questioning systems.”

Having experienced the darker side of such systems, both through the harmed children she works so hard to educate and through the experiences of her family, she believes more passionately than ever that it’s vital to take a stand against injustice. She’s calling on people to protest the annual New Zealand Defence Industry Association (NZDIA) Weapons Expo, held this year in Palmerston North on Halloween. “If you don’t want people to be killed, you need to stand up and stop the arms trade. Because people are making huge profits off the deaths of innocent people.”

“My nana (Elsie) would always say, ‘You see something that needs doing, you do it.’ It’s so important to draw attention to the Expo, because people don’t know that it’s happening on our doorstep. It’s something that you can directly affect, you can go down and have a presence at and make a noise.”

But what effect can small players like New Zealand hope to have on shutting down the global arms trade? “A few people can achieve a lot! If a small group of people getting petition signatures can push the government into going nuclear free, the same thing can be true for stopping the Weapons Expo. And the more countries that pull out of the arms trade cycle, the fewer weapons there are in circulation.”

“New Zealanders think of ourselves as pioneers,” she reflects. “Pioneers for suffrage, pioneers to go nuclear-free. New Zealand has done these things before, and has had a global influence – it’s a part of our legacy. These achievements were hard fought for – and hard won.” Elsie would be proud.